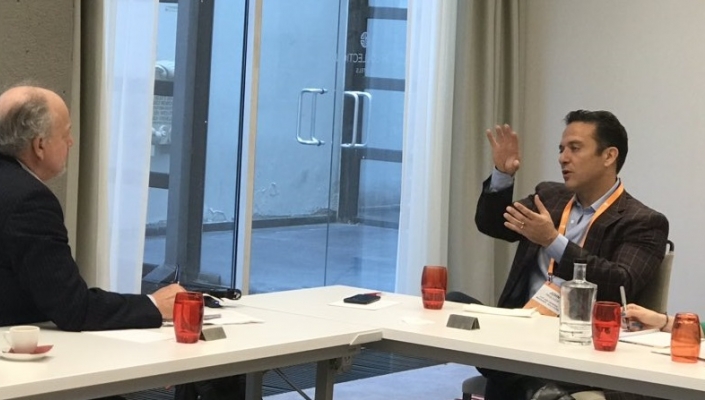 As head of the SolarWinds MSP software organization, John Pagliuca spends his time both on internal strategy and meeting customers. At the Empower MSP event this week, he was talking about where he is investing and how it will plan out in future. In particular, he predicts the emergence in Europe of specialist security service providers working in partnership with MSPs in the next year or so.

Automation remains his company’s strong idea, however: “We've been talking automation at this level for many years, but I think by investing in the automation team, we're actually making it tangible for the first time. At the event I have had people asking me to tell them what we’re doing and they're having an “aha” moment. On the security front the SentinelOne [partnership] announcement with password management is opening their eyes to ‘hey we need to step up our game’.”

But MSPs are feeling under some pressure, both from technology change and customer demands, he admits. “It’s the staffing issue. We see it in the UK and in Europe as well. It's hard for MSPs to land proper technicians or even to train junior technicians that will stay. To be able to hire and attract and compete with some of these Fortune 1000 firms or something smaller boutique shops is a challenge.

The second dimension is what is being asked of the MSP has gotten a lot broader. “It's not just buying new hardware, now it's the security angle, the SaaS applications and other kinds of complexity which is also driving them to be more specialist.”

“The first question I ask them as an MSP is ‘are you vertical - are you vertically-focused?’. And I've not heard the answer ‘yes’ once. If you have a certain vertical focus, then you almost have a playbook. Providing a service to mid-level banks or health care providers with a certain level of compliance means that they would gain some efficiencies that way.”

“The security challenges are consistent whether you're a dentist office or a financial advisor or a mid-sized retail shop. The whole point about being a service provider is scale, automation and standardisation until you reach a certain level of maturity.”

“If I were running an MSP I would be looking at standardising on the lower level services and applying that but and then looking at ways to leverage value-add services that are a bit higher up the food chain whether it be something like penetration testing or some type of knowledge-base understanding.”

Then there is MSP sales and marketing. “I actually appreciate the fact that our MSPs don't have the level of salesmanship that maybe some big enterprise companies have but to me it is an indicator of the fact that they're pretty good at their job. And a lot of what they focus on is more the technology than the customer service part of their job, which is good.”

Part of his message is that in any services business, the cost to retain is almost a fifth of the cost to acquire. So how does this work in the MSP? “One of the questions that it's always interesting to me is: ‘do you have a sales force?” that's usually an indicator of where they are in their maturity level. Some do; the ones that do not will be much more stagnant.”

One of the key indicators of a high growth MSP is how many resources are dedicated to the sales and marketing engine, he says. “What we find is that even in midsize MSPs the founders or owners are the lead technicians and are still doing sales and marketing in their spare time. And to me that is an indicator as to high growth versus low or moderate growth. You need to have a staff that is focused on looking to source and win new customers.”

“If I were an MSP, with my inbound demand which might be based on word of mouth or advertising I would try to determine whether or not it's going to be business that I want to have. One of the things that we tell our MSPs is that turning away business is not a bad thing. And you need to quickly ascertain whether or not this is a customer where you may not necessarily be profitable for the first three months of the first projects but that they have the right level service expectation. This is a profitable proposition for you in the long term. In outbound marketing, I think that's where we focus a little bit more on levelling the customer base.”

One of the best bits of advice that he has heard from an MSP is that there needs to be some alignment on what value the customer sees in you as a trusted adviser. “And that's got to be a long-term play. If they are looking at you as a necessary evil then that's probably not a customer that's going to be in for the long haul.”

“We’ve done a great job providing a blueprint for sales and providing a script and training to sales so they can qualify almost on a data-driven model where what type of long term customer it will be.”

Automation for sales again means a focus on efficiency and making jobs simpler and them more powerful. “To be honest that's the more powerful part of my business model - if I look at my MSPs, we're partners, effectively an extension of my sales force. And if we can educate them and give them the right collateral then I have 22,000 salespeople.”

“In a year's time I think we will be far ahead from a security point of view specifically around giving our MSPs more security. The MSP is becoming a target and we need to put stronger security measures and processes around them. The MSP can be that trusted adviser but if the it becomes a vulnerability in an SMB, then we have an issue.”

“In network monitoring, in Office 365 and cloud management I feel that we will see a huge uptick in app management capabilities and Office 365 management. We have an Office 365 backup offering for that reason. But there's also the administering of Office 365 and other SaaS application frameworks that I think that will be the next big wave.”

And he thinks the MSSP is going to split away from the MSP as a specialist area. “They will be regarded as the hard-core security service. We've seen that splintering already.”

Only a minority of MSPs can make that journey to MSSP - it requires a lot of time to do it properly, he says. “We have a program where we're coupling MSSPs together with MSPs. So if you're an MSP you're still becoming that trusted advisor but you're providing a path and a service that the MSSP is actually kind of doing behind the scenes. We're finding really great market traction for this in the US and again in the Netherlands. It may be early days in the UK but we think that it is actually the best path for the MSP in the short term and the long term. I believe that the UK will be ready in the next twelve months and I think Europe will follow shortly thereafter.”