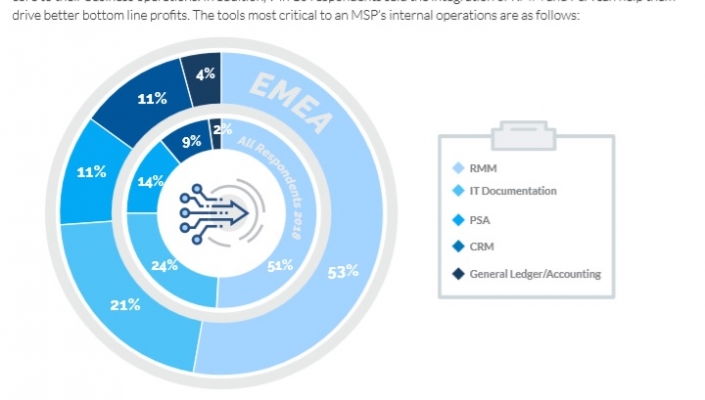 It also found that high-performing MSPs are not necessarily the biggest, but rather those that are savvier and bring more services on the table. Top performing service providers are ditching conventional models and choosing to compete on their strength rather than focusing solely on cost and repackaging the same old functionality.

Especially in EMEA, compliance is being taken more seriously than ever before as MSPs take a range of readiness approaches, which might be partly driven by the risk of incurring stiff non-compliance fines. Security continues to be a perennial concern, and in-demand infrastructure services are opening new doors to recurring revenue.

In the details, desktop, server and network support are ubiquitous, and are offered by 91% of MSPs surveyed. The top three underlying services that shows maximum growth in EMEA compared to last year are:

Onsite-to-cloud backup is on a roll across all geographies. There has been a huge increase in MSPs offering onsite-to cloud backup from 2017 to 2018, the survey suggests.

It attributes this to the higher margins it offers MSPs, presenting yet another opportunity for growth. On pricing models, the survey suggests that as MSPs move away from relying on break-fix services, the impact is being felt across the industry, particularly in how MSPs set pricing. MSPs are split down the line between per-user and per-device pricing.