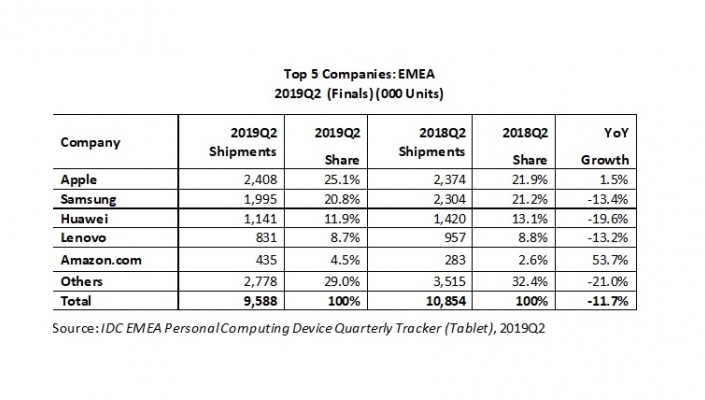 The EMEA tablet market declined 11.7% yr/yr, shipping 9.6 million units in Q2 2019 according to the latest figures published by IDC. The ongoing erosion of consumer demand for slate tablets remains the primary reason for the contraction, and a lack of innovative features and the increasing range of devices in the market are inhibiting tablet renewal. The good news for Q2, however, is the strong performance of detachables, which increased 11.8% after two years of consecutive quarterly declines.

"The expectation of a detachable rebound in the market was finally realized in Q2 and on a bigger scale than anticipated," said Daniel Goncalves, senior research analyst, IDC Western European Personal Computing Devices. "This was mainly driven by shipment pull-in of the freshly released iPad Air, a budget alternative to the iPad Pro and a contender to the Surface Go in the midrange tablet market with keyboard capabilities that have the potential to become a back-to-school winner."

Apple retained market leadership in EMEA, with the help of a buoyant detachable quarter and the resurrection of the mini. Samsung declined but continues to push its higher-end Android tablets across the region, highlighting its greater focus on profitability. Huawei contracted as the shockwaves from the ban in the US intensified in Q2 and had a negative impact on the brand's consumer confidence, particularly in Western Europe. Huawei held on to third place, however, and gained leadership in the CEMA region. Lenovo, continuing to shift its focus from tablets, posted another sharp decrease. Amazon updated its affordable Fire tablet range ahead of Prime Day, boosting its shipments in Q2.